Print Version of Mask of Silver Available In US and UK

Mask of Silver's print version will soon be available in UK as well as US. Aconyte planned to release their titles simultaneously in both countries. Then came pandemic round two. Which meant the ebooks of Mask of Silver came out in January along with the trade paperback in United States, while printing was delayed in United Kingdom. By April 1, the print version will be available everywhere. No fooling!

All the options for ebooks and print purchases can be found on this Aconyte page. Find your favorite ebook reader or how to order from your local indie bookstore as well as the Amazon links. Don't want to buy yet but do want to try it out? You can read a sample chapter at Aconyte -- and don't forget that your local library will often order titles if you request them!

What is Arkham Horror?

Mask of Silver is a stand alone novel in the larger media tie-in series Arkham Horror. A number of readers have asked about the "horror" part of the Arkham Horror line. The name comes from the card and board game published by Fantasy Flight Games. Fans of the game will recognize the Arkham investigators who make cameo appearances in the book. But you don't need to be a fan of horror or the game to enjoy the book according to recent reviews. Mask of Silver, which focuses on the crew of a silent movie making a film in a haunted house, is a historical fantasy, mixing Hollywood legends with a magical mystery that is much more Mary Roberts Rinehart than Edgar Allan Poe. Which means strong female lead needs to avoid the spooks to find her happy ending.

In Mask of Silver, Jeany Lin, a Chinese-American costume and make-up designer, works for silent movie director Sydney Fitzmaurice, who decides to take his small crew back to the ancestral home in Arkham to make a horror picture. Things become stranger and stranger as the movie progresses and Jeany will need all her wits to save her friends.

Here's what the reviewers say:

“I absolutely do recommend this, for the mood of Golden Age silent movies combined with ancient unknowable evils. Magic of all kinds, and regular folks trying to survive in many ways.  I loved Mask of Silver, and am very much looking forward to the next title in this excellent series.”
– The Catbox

“Mask of Silver definitely earned a five out of five from me...”
– Lauren’s Bookshelf

“Beyond the social pressures of the 1920s, Mask of Silver also gives us a really deep dive into the world of Black-and-White, Silent Cinema....This is absolutely crucial to this kind of insidious horror: rather than being able to dismiss this tale as something fantastical set in a place clearly of the imagination, instead you have something that feels like real history, a carefully restored picture of 1920s America – as such, when the creepy stuff starts to happen, you can almost start to wonder whether your mirror is reflecting things at an angle that should not be possible?”
– Fistful of Meeples

"Chilling, horrifying and thought-provoking in equal measure, Mask of Silver is a superlative piece of Arkham Horror fiction from Rosemary Jones, and is perhaps one of the best titles in the setting yet published by Aconyte Books. Deftly merging inhuman eldritch horrors and the very human horrors to be found in the United States of the Jazz Age, Jones has created a distinctly memorable and incredibly enjoyable monochrome-tinged adventure though Hollywood and the silver screen. At times almost writing a meta-narrative that comes across as a film itself, with a fantastic sense of period atmosphere and an enthralling and unnerving narrative, Jones has written a genre masterpiece – and one with more than sufficient hooks present to allow for a sequel – or two."
–Sci-Fi & Fantasy Reviewer

Other novels by the author:

If you like fun swords-and-sorcery fantasy, you might also enjoy my Forgotten Realms novels, based on the popular game Dungeons and Dragons. The print editions are out-of-print but they are still available on Kindle and Audible.

Crypt of the Moaning Diamond:  Explore the terrifying depths of the dungeons of Faerun with the merriest band of misfits to ever dig a tunnel! And their little dog too!

City of the Dead:  Ghosts, skeletons, and skulduggery. It's just another day in Waterdeep's largest graveyard for Sophraea Carver, whose family takes care of the tombs. But now there's a wizard poking around, an angry Lord investigating disturbances, and more things are starting to go bump in the night.

Jaunts Afar and Beyond:  A collection of fantasy short stories that previously appeared in a variety of anthologies. Inspired by fairy tales, murder ballads, and memory houses, there are four guaranteed happy endings, one ambiguous, and one grim indeed. Take six jaunts into places afar and beyond. All for less than $3! 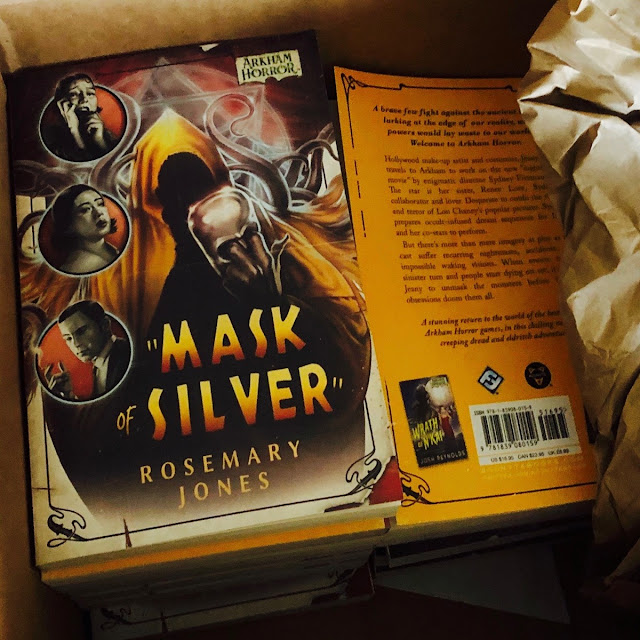