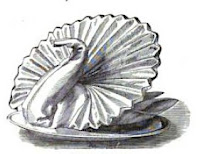 When I wrote one of the stories contained Cobalt City Christmas, a fine anthology of cape, cowl, and Christmas cheer, a major plot point in my tale, quite by accident, became swan napkins. Since my swan napkin article has become one of the most visited posts on this blog. As we are rolling into the holidays again, I felt it was time to bring this one back to the top of the pile.

In the story, the Egyptian magician, Doctor Shadow, festoons the dinner table with these little beauties. He uses the telekinetic manipulation of the material and a little sorcery to make the perfect swan napkin.

Anyone who has attempted to fold a swan napkin without the aid of magic knows that you need either Martha Stewart's supervision or a little spray starch to pull off a nice firm shape.

The Victorians used to wet the napkin before folding, a practice roundly condemned in one 19th century book of manners since "the napkin must be damp at the folding, it is not always dry when shaken out. Nothing is so unhealthy as a damp napkin; it causes agony to a delicate and nervous lady, a man with the rose-cold, a person with neuralgia or rheumatism, and is offensive to every one."

Not wanting to cause agony to your guests, you may want to try these directions from the Book of Dinner Serviettes (1873). The anonymous author advises the following to create the swan napkin shown above: 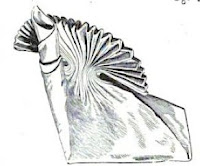 Crimp up on end of the damask in the manner of a fan [as shown left]; then fold under the other end to meet the bottom of it; then take the left side of the Serviette, and roll inwards to the centre of the fan; repeat this on the right-hand side; turn the Serviette over, and bend into the shape the part forming the head and neck of the swan; this completes the Serviette.


If you do manage to fold a swan napkin for your next dinner party, tweet me a photo. I'd love to see it!
Email Post
Labels: Anthology Cobalt City Rosemary Jones swan napkins