How I Started Writing In The Realms 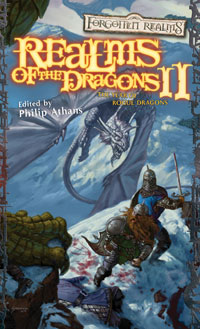 With the closure of Red Room this month, I'm moving some "how to" writing articles from there to this blog. The following on how I got started writing shared world adventures always got the most hits on that site.

So here's my history for anyone who is contemplating jumping into a shared world or collaborative publishing project.

How I Started Writing For Wizards Of The Coast

Several years ago, I was one of the writers who entered the Wizards of The Coast "Maiden of Pain" contest. The editors were seeking a writer to craft a novel about a very dark goddess. My idea was rejected. Apparently a romantic comedy involving the Forgotten Realms' own goddess of torture was not what they were looking for...

However I was invited to "keep trying" as the editors liked my sample chapter. This led to multiple rejections -- even as fellow competitors/losers like Erik Scott de Bie secured contracts (and this is the only context where I would call the tall dude a loser, as he's a fantastic tale teller and all round nice guy. But his Maiden of Pain idea also was rejected).  I eventually wrote to the editor who  kept inviting me to "try again" and asked "How can I do better?"

He suggested focusing my one-page proprosals on the main character and tell how she or he achieved their goal in the course of the plot.  So I wrote my proposal for Crypt of the Moaning Diamond focusing only on what the heroine was trying to do and how she accomplishes it. The novel eventually hosted many minor characters, subplots, etc. But the proposal was very short and very focused and received the editorial stamp of approval.

About the same time, I also pitched short story with a similar very, very short focused outline. That made it into Realms of Dragons II. A number of "young dragons" emerged from that anthology to become fantastic email buddies. This includes Erik, who lives here in Seattle. He invited me to meet him for coffee in a bookstore. Which led to many cups of coffee and discussions of writing since -- and again shows what a gentleman he is, because Erik doesn't drink coffee! Shocking....or at least to this caffeine-addicted lady who cannot even contemplate living in a city without an espresso place on every corner.

Erik's friendship -- and that of many other authors in my life -- provides that essential cheap group therapy that all writers need ("I'll never write again." "Yes, you will." "No, I'm doomed to eternal rejection." "Want a doughnut?"), invitations to participate in other projects outside the Realms as you can see from the covers on the sidebar, and a whole host of new books on my shelves. Because friends buy friends' books (yes, this should be my bumper sticker).

The moral of the story should be not everyone sells on the first try. Or even the tenth. And, although I made many runs at writing for a specific shared world project, don't lock yourselve into one specific path to publishing. I've known a number of writers who only want to write for publisher X or set their story in world Y. Sometimes you have to be willing to walk away. I write many things outside the Realms and always will. Just as I'll always be happy to answer the call when somebody wants me to go adventuring there.

The important thing for me about all shared world projects is that I do get to pick WHAT I write in terms of plot, characters, and resolutions, even if the physical setting is dictated by the publisher or world creator. Having that freedom means that shared worlds, for me, are much like writing something set in the real world. You have to do your research, and check your maps, but there's no limit on where you can take your story.

Writing in somebody else's world or collaborating to create a new such world does not have to be restrictive or limit your imagination. You may find it freeing as fellow adventurers lead you into places that you never suspected existed.